On Sunday 10th October, Bridgwater Arts Centre officially celebrates it’s 75th Anniversary. In order to celebrate this occasion there is a free event taking place on the day in question from 11am to 4 pm. The bar will be open, food and refreshments will be available and there will be entertainment provided by a varirty of local performers. Please feel free to join us.

And speaking of all things 1946, a recent trawl through the Arts Council’s web-site revealed this interesting historical snippet;

One of the Council’s actions in 1945 had been to prepare a Arts Centres model of an arts centre suitable for a small town of, say, 15,000
to 30,000 inhabitants. The Council’s suggestions have been taken up by a number of private societies and public authorities and, although it has not been possible yet for an actual building to be undertaken, several plans are now being worked out in different parts of the country. The last Annual Report mentioned the Arts Centre designed Mablethorpe for the Urban District of Mablethorpe. A model of the Centre, commissioned by the Arts Council, was shown to the public in London in May, 1946, and later in Mablethorpe itself. In the autumn of 1946 an opportunity occurred for the Bridgwater Council itself to experiment in this field. A house at Bridgwater, Arts Centre in Somerset, which had been in use by the War Office, was de-requisitioned and the Council agreed to rent it and run it as an Arts Centre.

The building has unusually favourable qualities, being large enough to house both a secretary and a caretaker and having attached to it a well-equipped hall with accommodation for about 260 people. Its members were responsible, in the first place, for furnishing the house, and this they did with taste and success. The Arts Council now runs the Bridgwater Arts Centre as landlord. Joint secretaries, who live on the premises and plan its programme, are responsible to the Council. The hall and rooms, while mainly used by the Arts Club, are not only let on occasion to professional theatre companies and other outside visitors, but are also used for the Council’s own exhibitions and as an experimental centre for musical and dramatic programmes designed to tour other arts centres and small halls. Eventually it is hoped that the Bridgwater Arts Club will takeover the lease of the Centre and run it on its own responsibility, with or without financial assistance. The very helpful co-operation of the civic authorities, of the Bridgwater press and of other influential people, including the managers of the local cinemas, gives a good chance of this development . Meanwhile, the Council hopes to make its own experiment at Bridgwater an illustration of what might be done in varying ways, but with similar local support, by independent enterprises elsewhere 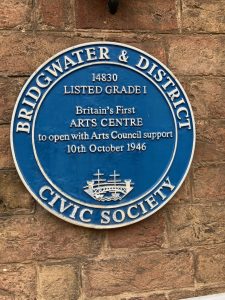